Khun Keng is celebrating his birthday at Dolce Vita on Sunday, July 31st!
The Party begins at 7pm - come out and join him for the celebration!
Posted by Gay Jomtien Beach at 9:25 AM 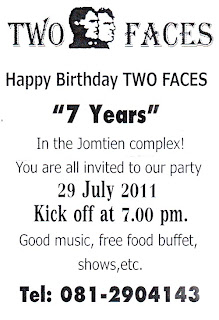 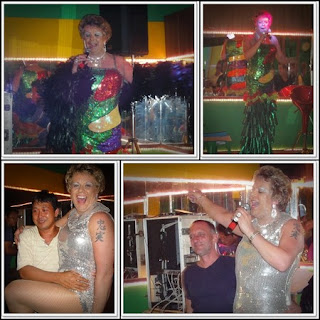 Tuesday night, The Pour House held a charity event to raise funds for TAKE CARE!!, a local organization that provides Condoms for male sex workers in Pattaya to help prevent the spread of HIV/AIDS.

Entertainment for the evening included a local  Thai guitarist/vocalist  who performed a number of popular western songs followed by Australian "Female Illusionist" Sandy Bottom, who graciously donated his time for this special event.

Sandy wowed the crowd for over 90 minutes performing (in his own singing voice) songs from the 60's to the 80's. A powerful voice and an engaging personality, Sandy Bottom proved to be the highlight of the evening.

Due to the fact that July is the middle of the low season, the event was primarily attended by locals. The Pour House, who hosted the event, donated 20% of the bar revenue from 8pm - midnight. 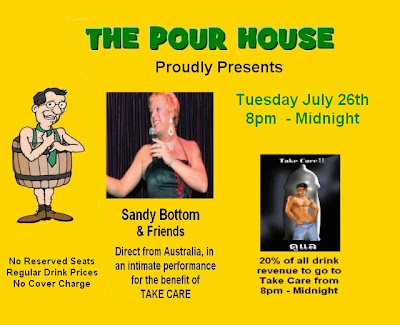 Australian Cabaret Artist Sandy Bottom will perform at the POUR HOUSE Tuesday, July 26 in a benefit to support TAKE CARE!!. This will be an intimate cabaret evening with opening acts from 8pm. Sandy has graciously donated her talents and the Pour House donate 20% of the bar take from 8pm - Midnight to Take Care!!.

No Cover Charge
No Reservation of Seats
Regular Drink prices

Come out and support a great cause!

For more information on Sandy Bottom click http://bottompromo.com/blog1/
The Pour House is located in the heart of  Exciting Jomtien Complex
Posted by Gay Jomtien Beach at 10:59 AM

It's A Pour House Party!!

Tuesday July 19th marks the birthday of two of their staff, Mr. Tik & Mr. O. You are cordially invited to join us as we celebrate the boys big day with free food, live entertainment and special giveaways for all of our guests!

The Pour House,  located in the " second soi " of Jomtien Complex (across from Ganymede) has been open just under two months.

Not a "Boy Bar", per se but rather a "no hassle" gay bar that looks to provide a watering hole for those farangs who want somewhere to take their Thai boyfriend (without being pounced on) or simply want a place for a friendly drink & conversation,

Drop on by for the party, or come in any night. The Bar is open from 5pm daily.


The Pour House Website
Posted by Gay Jomtien Beach at 9:46 AM